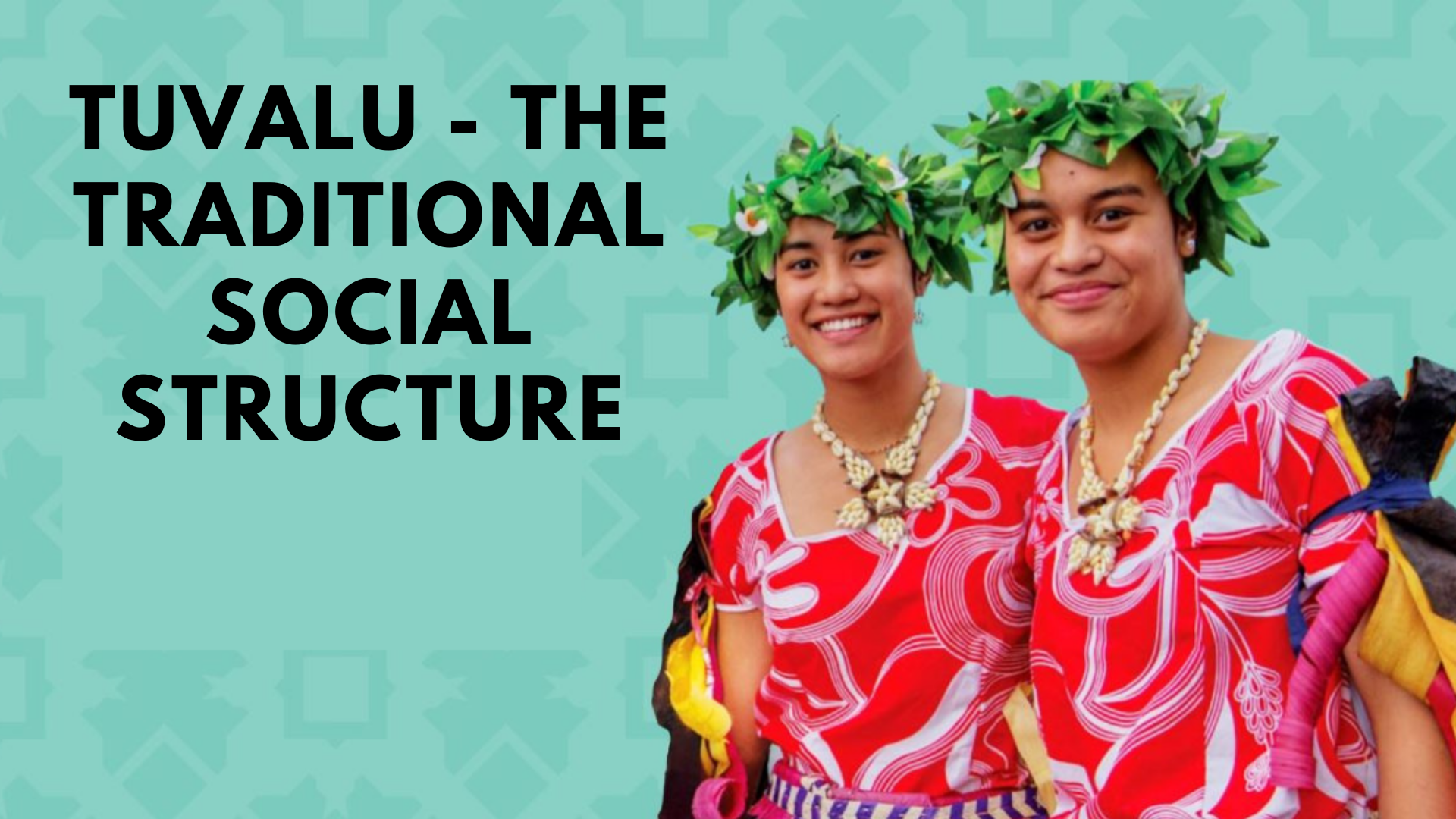 The aliki or chiefs were the recognized leaders of traditional Tuvaluan society. By virtue of their position, inherited from their ancestors the aliki were entitled to make demands on their people.

They possessed the power to rule although this power was not theirs alone. Our ancestors believed in a mystical relationship between the supernatural world and the aliki, who were seen to be the shadow of an even mightier and more powerful being whose domain was the whole universe. To go against the rightful authority of the aliki was to disobey that all-powerful being.

The aliki's decision was commonly regarded as a final judgment no matter how harsh or how wise it might be, regardless of how people were affected by it. A decision of an aliki was a serious pronouncement and no person or family could violate it - which at times they did - without running the risk of being punished, possibly by being forced to leave the land for the great sea. Even the penalty of death might be imposed by an aliki.

As well as being a ruler, the aliki was also the symbol of community pride and identity past and present and was expected to protect the culture inherited from the ancestors. If he did so, he would be admired by his people who enjoyed the security offered by a stable and familiar way of life. Tradition indicates that if the behavior of any person, aliki or not, was too far removed from normal standards, then that could bring great disgrace on his family - and retribution on the offender. According to our legends, in order to ensure peaceful and trouble-free lives people were well advised to respect customs and traditions because they contain our ancestors' knowledge of how to have happiness in this land.

To assist him in ruling the land, the aliki had the tao aliki, or assistant chiefs. They advised him on the state of affairs in his domain. The slightest news of a threat to the peaceful existence of his people would be reported to the aliki, and countermeasures planned.

The tao aliki were usually the mediators between the people and the aliki. They were responsible for the administration and supervision of the land and the people. They organized means of distributing land and food. They arrange communal works and fishing expeditions.

The elders of the community were male family heads. In early times they were advisors to the assistant chiefs. They could even admonish the aliki, though mainly on matters relating to the food supply and the preparation for war. Their word was always respected, and they were sometimes invited by the aliki to counsel him. Nearly all of them were given a specialised task in connection with the aliki. Some were very experienced cooks, and they could cook for the aliki. Others were chiefly responsible for making the aliki ointment and for beautifying his house.

Tuvaluan women were usually led by those of noble birth. It was the work of the sisters and daughters of the aliki to ensure that the women were usefully engaged in making mats, baskets, thatch, string, fishing shoes, ointments and in other activities. The custom of those days was that every man and woman should possess numerous things of value, so as to maintain or increase their status. Those of higher birth had to ensure that they had more possessions than the ordinary people. It was customary in those days for women of common birth to try and become servants of the aliki, which was the highest position any commoner woman could obtain. It was also a thing for their children to be proud of.

Every sologa or family had a particular task (pologa) to perform for the community. Each solonga was expected to excel in developing the skills and the knowledge of the task assigned to it. Certain sologa were skilled tofuga (builders of canoes or houses). Some were responsible for fishing and farming, and others for warfare and for defense.

The usefulness of this system is shown by its survival. The various families' pologa (special tasks) are still known to most Tuvaluans. It is extremely difficult to impart the skills and knowledge of one pologa to others. It is tapu, the knowledge of which is only meant to be used for their own contribution to general well-being. No records were written, because all knowledge was passed from father to son by word of mouth. Even experts for the various pologa will not dare to record their knowledge for fear of having it stolen by people who have always been hoping that one day they will have access to the inherited knowledge of other families.

From the 1820's European traders began to visit Tuvalu and brought with them many goods which were completely new to the islanders. The European idea of trading and the use and value of money were all fascinating to our people. European traders gradually settled in most islands where they set up centres to trade their goods or money for copra, pearl shells, handicrafts and other items. They succeeded in persuading the aliki to become keen supporters of their commercial activities, although the villagers sometimes disapproved. If they saw their aliki becoming a frequent guest at the trading centre the people became confused. Their long-time honored lord was often drunk and misbehaved himself. They thought that the aliki had been robbed of his wisdom and respect for the aliki declined among their subjects.

Strong as it was, the influence of the traders was overshadowed by that of the pastors sent from Samoa by the London Missionary Society to convert the Tuvaluans to Christianity. Yet the Tuvaluans were never without religion. They believed in the existence of a most powerful force which can be understood to be God and whose power was exercised by spiritual being known as atua and aitu. When the Samoan missionaries came, they found that the people had their own religious beliefs, as shown in the legendary history of all islands. The people were fully aware of mana or spiritual power. They had their own religion which was destroyed by the Samoan pastors.

The Samoan pastors were men who were trained to face whatever formidable circumstances they met while spreading their new religion. They aimed to dominate and even rule. It was due to the dominating nature of the Samoan pastors that they were able to place their own authority above that of our chiefs. They eroded the traditional institutions of our society and even claimed that they themselves were chiefs or vicars of Christ on earth.

The Samoan pastors also introduced their own lifestyle and even made codes of laws to replace the traditional ones of our society. This practice finally destroyed much of the wealth of the culture and tradition that were once the social machinery of our ancestors' lives.

The Samoans, knowing the meaning of biblical verses, first taught the verses which said that the people should give things to the messengers of God - the pastors. This certainly increased the giving of food and valuable items such as mats and pearl shells. Having believed in the Christian doctrine, the people not only gave things but also made the pastors their masters for almost a century. Even the rightful share of the aliki from fish and the heads of turtles was given to the pastors who were the new shadows of that mightier and more powerful Being.

The following diagram shows the social and political structure of a traditional Tuvaluan society. 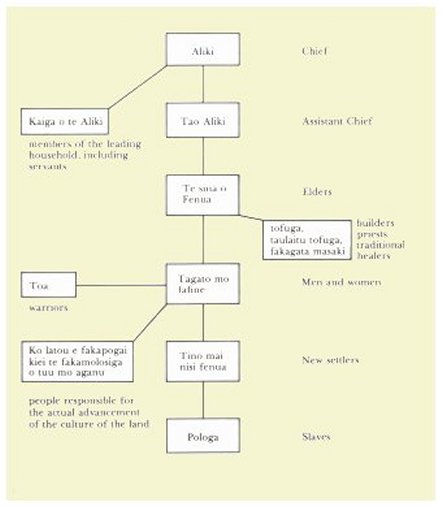