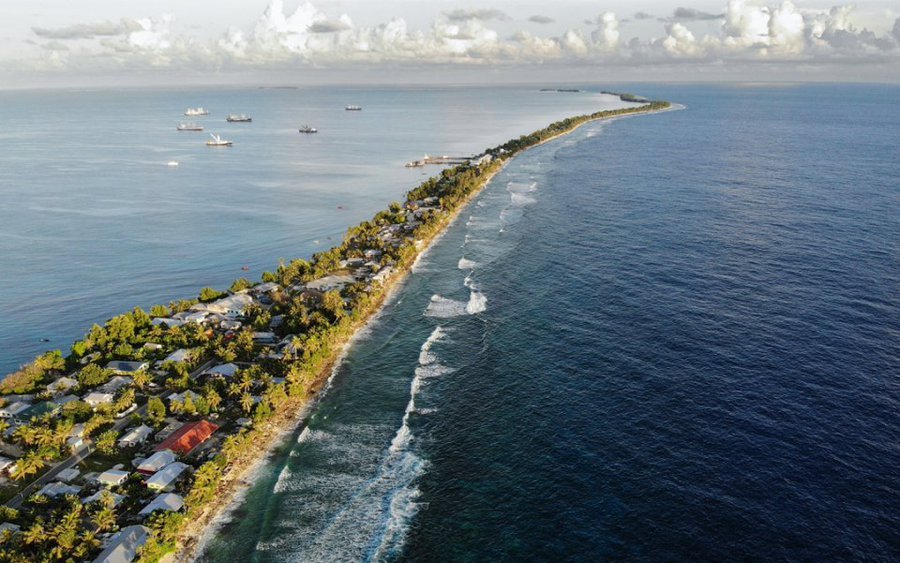 The intent of this Web site is to examine the religion of Tuvalu prior to the introduction of Christianity. Indeed, prior to Christianity the lives of the people on the islands of Tuvalu were surrounded with beliefs about spirits and gods of various descriptions.

The most comprehensive documentation of early religion is contained in A Narrative Of Missionary Enterprises In The South Sea Islands by the Reverend John Williams of the London Missionary Society, published in London by John Snow in 1840. Williams defined religion by observation upon four points:

The objects worshipped by them were of three kinds - their deified ancestors, their idols, and their etus. Many of their ancestors were deified for conferring supposed benefits upon mankind. It was believed, for example, that the world was formerly in darkness; but that one of their progenitors, created the sun, moon, and stars.

Idols formed the second class of objects regarded with religious veneration. These were different in almost every island and district. Some were large and some were small; some were beautiful, while others were exceedingly hideous. The third object of worship was the etu. It consisted of some bird, fish, or reptile, in which the natives believed that a spirit resided.

In addition to these objects of adoration, the islanders generally, had a vague idea of a Supreme Being, whom they regarded as the creator of all things, and the author of their mercies. They called him Tangaloa: and at their great feast, prior to the distribution of the food, an orator arose and, after enumerating each article, explained, "thank you, great Tangaloa, for this!"

The worship presented to these deities consisted in prayers, incantations, and offering of pigs, fish, vegetable food, native cloth, canoes, and other valuable properties. The ideas of a future state were very peculiar. They believed in its existence, but were ignorant of the value and immorality of the soul, and knew not that eternity would be the measure of its sorrows or joys. 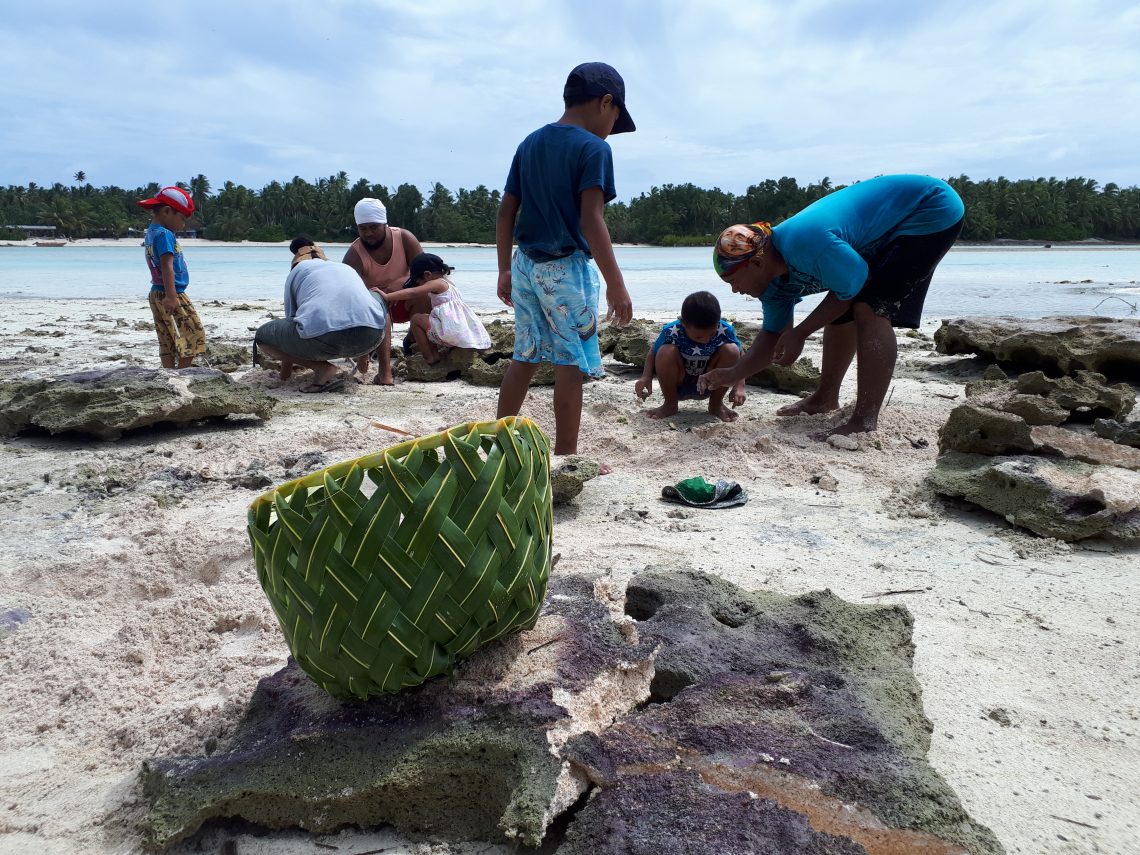 Williams's early observations were consistent with the number of later observations in suggesting that early Tuvaluan religion possessed a basic consciousness of one paramount God who dwelled in the heavens. Other early missionary writings including those of the Reverend S.J. Whitmee (1870) recognized also that Tuvaluan religion was often based as Williams suggested on worship of deified ancestors. Whitmee in 1870 made the following observation of religion in the Tuvalu group:

They worshipped the spirits of their ancestors; mostly those who originally peopled the islands, but some of the later generations have been deified in some of the islands. They have shrines in some places where they offer their devotions and where the gods come to hear their prayers and accept their offerings.

An example of ancestor worship was found on the island of Nanumaga. Foelagi and Maumau, whom the people of the island believed to be their ancestors, were the principal gods there.

For each god there was built a temple, and inside these temples, the skulls of great men, including those of Foelagi and Maumau, were accommodated as objects of worship. Dr. W.W. Gill wrote in 1885 of this island:

They worshipped shooting stars and rainbows, but the principal objects of adoration are the skulls and jawbones of the dead. It is the custom in Nanumaga, when a great chief or much beloved head of a family dies, to bury the corpse, but on the third day, the head is removed and flesh graved off and eaten raw with coconut by the sacred men. The clean skull with the jawbones are then put on a tray and taken to the appropriate temple, and thenceforth become objects of worship.

Offerings of food were taken to the temple so that the gods might partake before anyone else ate anything. 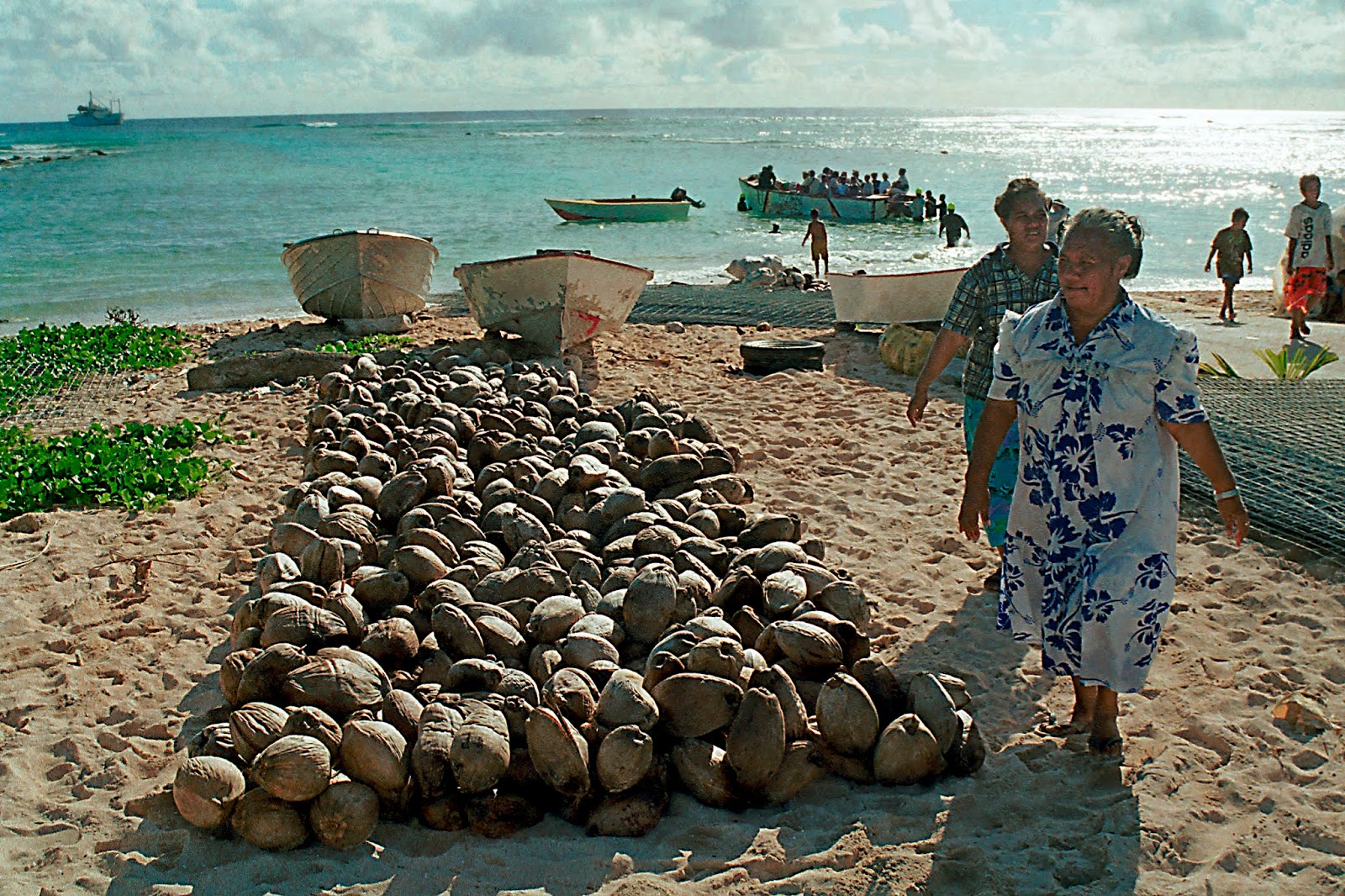 Coconut food offerings laid out on the beach

The writings of other missionaries who visited the Tuvalu group in 1878 made the following observations about religious practices in Nanumaga:

While visiting one of these temples I saw a number of fresh plucked and husked coconuts laid down, one before each skull. After a time the nuts were taken away and eaten by the family who laid them there.

At Niutao, offerings to Kulu, their principal god, were eaten only by the priest, or by any stranger to whom the priest might hand a share. At Nanumaga the offerings were made by individual families, who would take food to the temple, leave it there for a couple of days so that the gods would partake of it first and then bring it back and eat it themselves.

A purification ceremony was recorded by Murray who visited Nanumea in 1866. The ceremony was performed especially for visiting boats or canoes from strange lands, to get the consent of the deities for the visitors to land and go about the island freely. The procedure was as follows:

When a boat or canoe is approaching the beach the natives rush into the water and seize it, and carry it and its crew and everything belonging to it right up inland. They make all the strangers wait at a distance till preparations are completed, and when that is done, they are taken to the place appointed and a long round of tedious ceremonies is gone through in front of a large coral slab, about nine feet in height. The observances consist of presentation of coconuts to various deities, accompanied by prayers, singing, and dancing…One of the concluding observances is very curious, the strangers are sprinkled with water all round.

Idol worship was common throughout the group. In Nanumea every family possessed an idol which they worshipped. The idol, according to the old men of Nanumea, represented the god Tuafale, the principal god of the island. A similar sort of family worship was found in Niutao by Moresby. Although they had Kulu, their principal god, whom they worshipped as a whole group, each family had a hut where a spirit was believed to dwell. They did not formally worship this spirit, but they used it to kill other people or to protect themselves from other spirits.

On the island of Nukufetau, the story of pre-Christian worship as remembered by the old men says that before Christianity was introduced, there was a temple on the island where worship took place. The objects of worship were foreign objects found on the island. That is, such things as bottles, timbers and other things that had probably been thrown overboard from ships. Any rare things discovered on the island were reported to the vaka-atua or priest and then prayers would be offered. This tradition is also reported by Turner who said of the island in 1884:

Any rare beads or other fancy articles from a ship were presented. If concealed the god knew it; he was omniscient and brought death on the culprit.

Tradition in Vaitupu says that Foilape was one of their principal gods, brother of Tinai, a female who was the principal guardian spirit of the island. A legend in Funafuti says that Foilape was a giant who used to travel around the group in search of somebody who would be strong enough to match his strength. During his tours no one was able to defeat him. He was then regarded as possessing supernatural strength, and after his death was honoured as a god on Funafuti, Nukufetau and Vaitupu. His fame spread beyond these three islands to the other neighbouring islands of Tuvalu.

Beside the principal gods to whom the people offered food and precious possessions, there were also numerous other spirits of minor importance to the worship life of the islanders, but who were terribly feared. Darkness was considered the time that these spirits would roam the island. The result was that as soon as it was dark, no one would dare to go out of the house, not even a few steps outside. The whole night was an extremely dull period for a people of strong superstitious ideas.

These spirits exercised powers in certain areas. If one intended to trespass on an area that belonged to a particular spirit, he had to perform some kind of ceremony to appease that spirit before entering the area. If this was not done, some sort of evil would fall on the person concerned.

The men of great importance in these old religions were the vaka-atua or priests. They were the people who represented the gods to the people, and vice-versa. On each island there were particular families from which these vaka-atua originated. They were feared and respected because of their power to invoke the gods to bring disaster on those who hated them and good fortune to those who sympathised with them. They did not work and the people provided them with food.

The vaka-atua had tremendous authority and when he chose to give an order, even the king would have to abide by it. He had little to do with the direct running of the welfare of the people, but many times he would be asked for the advice on various matters. When he chose to play politics, he would never fail to achieve what he wanted.

An example was the vaka-atua on Funafuti before Christianity came. He was called Levolo and he represented the god Foilape. At that time there were two high chiefs; one at Mulitefala named Kofe and one at Fogafale named Talafou. Levolo was allied to Kofe. As neither of them had much land, Levolo persuaded Kofe that they should conduct a re-allocation of lands on the whole island.

The first allocation of lands had been done by Tauasa from whom Talafou descended, and so Talafou and other minor chiefs of Fogafale had the most lands. In spite of the protest by Talafou and the Fogafale chiefs, Levolo ordered that it was the wish of Foilape, the god. The re-allocation of lands was therefore carried out under the supervision of Levolo himself. He used the sinnet cord to measure the boundaries. However, ownership of the land has subsequently reverted to the original owners - the descendants of Tauasa, the aliki or chief of Funafuti.

The introduction of Christianity put an end to pre-Christian worship and to vaka-atua. Yet even today there are still people who claim to have control of spirits. Once they were known as vaka-atua, now they are simply called tino faivailakau or magicians.