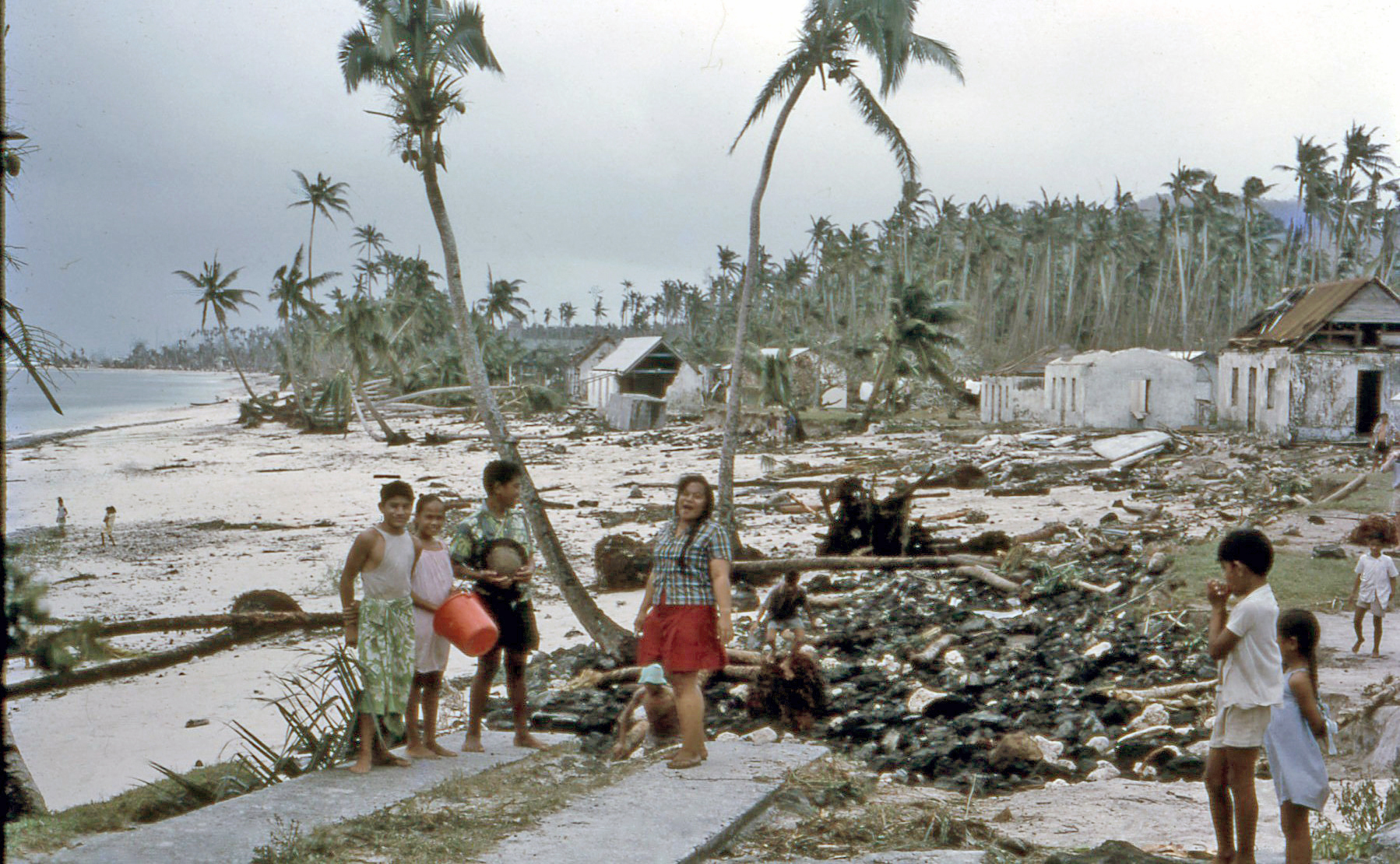 On October 21, 1972, Hurricane Bebe hit the Ellice Island of Funafuti. Winds that went up to 130 miles per hour did a lot of damage. Six people were killed or went missing, and it was said that 95% of the homes and crops were destroyed.

Then, on October 23, 1972, Hurricane Bebe hit Fiji with even stronger winds (170 miles per hour). Thirteen people died, and thousands of people lost their homes. There were also a lot of animals that were killed.

The Adverse Effect Of Hurricane Bebe On Tuvalu And Fiji

The first island nation to experience Bebe's effects was modern-day Tuvalu, which was once known as the Ellice Islands and was a British colony, between October 19 and 22. The system began to strike Tuvalu on October 19 with sporadic heavy rain being observed in the island nation.

The next day, the weather worsened with gale-force winds, flooding, and a rough sea being reported. The ship Moana Raoi, which had just arrived in Funafuti's lagoon carrying supplies from Suva, Fiji, was quietly anchored on October 20, despite the strong seas.

The fortnightly Air Pacific plane transporting supplies from Nadi, Fiji, turned back the following day since the Funafuti International Airport airstrip was inundated, as it was around 80 km (50 km) away.

The head of the New Zealand Meteorological Service weather station tried to warn as many people as he could after receiving a hurricane warning, including the master of the Moana Raoi, the fishery officer of the Van Camp fishing fleet, and the representative of the Gilbert and Ellice Islands Development Authority.

The majority of the islands suffered little to no noticeable damage; however, the low-lying island of Funafuti was severely impacted after the system moved over the coral atoll on October 21. For many hours, the island experienced hurricane-force gusts, and during that time a storm surge rushed across the island, killing three people, demolishing homes, and leaving coral debris.

The meteorological station's coral wall was destroyed by high waves connected to the system, which led to water rushing into numerous buildings and destroying the majority of the equipment.

Between October 22 and 25, Bebe struck the whole newly independent island nation of Fiji, making it the worst tropical cyclone to hit the islands since 1952. The Nadi weather office issued hurricane warnings for the majority of the island country, including Rotuma, before the system threatened the Fijian Islands.

Numerous structures had hurricane shutters installed; in addition, schools were closed, local air service was suspended, and cruise ships were canceled; smaller ships took refuge. Additionally blocked were the international airports of Nadi and Nausori. The Fijian Parliament was suspended on October 22 in order to deal with the cyclone.

On October 23, the system moved over Rotuma, a Fijian Dependency, with winds reaching hurricane force at speeds of about 275 km/h (170 mph). The island was said to have sustained substantial damage, with numerous homes and other structures either completely destroyed or severely damaged.

The majority of the island's crops were also lost, and citrus trees, copra, and coconut palms were all either destroyed or damaged. It was calculated that for the following three to six months, between 60% and 90% of the population would be reliant on aid.

The first plane that New Zealand sent to the islands had 54 cubic feet set aside for the New Zealand Red Cross. They put medicine, two tents to use as dressing stations, and distilled water in this space.

About 450 cattle in the Western Division of Fiji died because of Hurricane Bebe. Dalgety New Zealand Limited bought 50 Hereford heifers (as seen above) and had them shipped from New Zealand after the Fiji government told the New Zealand Red Cross what they needed.

Then, the Fiji Agriculture Department crossed them with Brahman bulls to make a new breed called Braford. 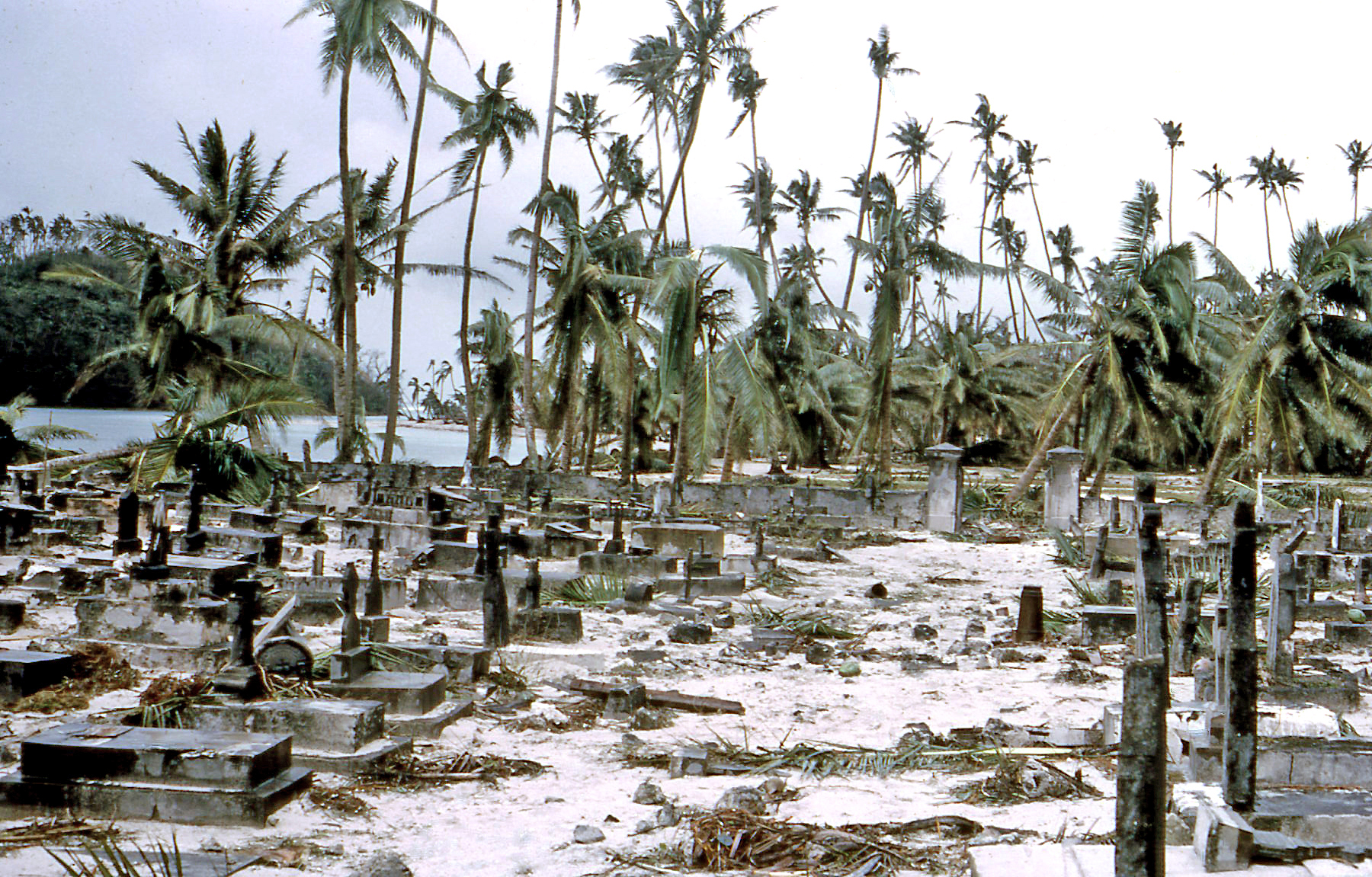 A cemetery damaged by Hurricane Bebe in October 1972

The Origins Of Hurricane Bebe

Severe Tropical Cyclone Bebe's origins can be traced to two tropical disturbances that were first observed on opposite sides of the Equator close to the 175th meridian west on October 16. Before it hit the Marshall Islands, the initial system formed in the Northern Hemisphere and eventually became Typhoon Olga.

On October 19, the second disturbance began to travel westward after developing in the South Pacific Ocean and began to show characteristics of becoming a tropical cyclone. The system was given the name Bebe by the New Zealand Meteorological Service over the course of the following few days after it began to move south-westward and reached category 1 status on the modern-day Australian scale.

On October 21, the system passed by or over Funafuti's Elice Island, which had hurricane-force winds.

Hurricane Bebe gradually weakened on October 22 as it went over the Tuvaluan reef island Niulakita, 120 km (75 mi) to the west. The system's circulation had already begun to move in a south-easterly direction and had a radius of roughly 965 kilometers (600 mi).

After that, Bebe was discovered by a Royal New Zealand Air Force aircraft that was on a search-and-rescue mission to Tuvalu, around 60 km (35 mi) to the northeast of Rotuma.

A category 3 tropical storm on both the Australian Scale and Saffir-Simpson hurricane wind scale, the system later moved close to or over Rotuma and peaked with 10-minute sustained winds estimated at 155 km/h (100 mph) and 1-minute sustained wind speeds of 205 km/h (125 mph). The system continued southward towards the main islands of Fiji that day, striking Rotuma with hurricane-force gusts.

On October 23, the system was visible on the Cossor Radar screen at the Nadi Meteorological Office. The hurricane's center continued to the north shore of Viti Levu. Hurricane Bebe changed from a tropical storm to an extratropical cyclone on October 25 before its last sighting on October 28.

What Category Was Hurricane Bebe?

When Did Hurricane Bebe Hit Fiji?

Does Fiji Get Hurricanes?

Yes, in Fiji, cyclone season is from November to April.

Hurricane Bebe damaged both Tuvalu and the Fijian islands. It killed 19 people (6 in Tuvalu and 13 in Fiji) and left thousands of people without homes. Damages were thought to be worth more than $20 million in total (1972 USD).